De
Marco
Lab
Neurological illnesses such as autism spectrum disorders, schizophrenia and epilepsy are thought to arise during the development of the nervous system.

Increasing experimental evidence suggests that an imbalance between excitatory and inhibitory activity within the brain is a critical factor in the etiology of these illnesses. Our laboratory is currently investigating the interaction between electrical activity and genetic programs in early brain development with an emphasis on inhibitory neurons. We use the mouse as a genetically tractable mammalian model system.

In the short term, we hope to elucidate the type and source of electrical activity responsible for interneuron development. We are exploring the role of neurotransmitters such as glutamate and gamma-Aminobutyric acid (GABA) in the regulation of interneuron maturation. In addition, we are studying the contribution of glutamate and GABA receptors for the establishment of neuronal morphology during development. We use viral tracing techniques, electrophysiology and mouse genetics to probe developing circuits and manipulate their activity patterns.

Ultimately, we hope to reveal the emergent connectivity of different interneuron subtypes as they become integrated into nascent cortical circuits. We are interested in understanding the mechanisms by which neuronal activity controls the assembly of these developing circuits and how the disruption of such assembly contributes to the pathogenesis of an array of neurological disorders.

EXPRESSION OF CHANNELRHODOPSIN 2 IN THE CORTEX 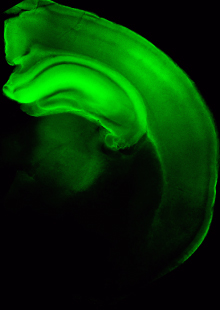 EXPRESSION OF CHANNELRHODOPSIN 2 IN THE THALAMUS 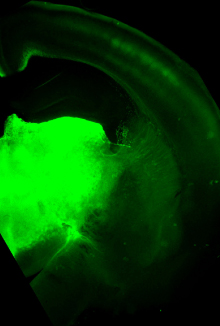